Start a Wiki
Saga Bergman (佐賀褒曼 Saga Hōman.  佐賀バーグマン Saga Bāguman) is a 11 year old girl that is Swedish that lives in Germany and the protagonist of the series called A little Snow Fairy Sugar.

Saga's name is a female ♀ name that is from Sweden. Saga's given name means 'Fairy Tale'.

In the anime, Saga wears only a few types of clothes compare to the manga. Mainly Saga wears a white and blue sleeve top with a folded red skirt with long socks and dress shoes. Some times she wears a black bracket. Her hair is short that goest about to her shoulders and her eyes are brown. Saga always wears hair clips in her hair that are circle shape with ribbons through it. She also haves a matching Necklace that looks like her hair clips.

In the manga, Saga wears all sorts of other clothes. She does wear the same main outfit she does in the anime, but her socks are a bit longer.Also in the manga she wears a pj's unlike the anime version.

Saga's moods change so often and fast. She is, sweet, get's ticked off of money rates, and angry.

She can be quick to lose her temper when she deals with Sugar, however, she is actually very kind and quite mature for her age.

She pays Attention to detail that's all around her. She prefer not to sit at a desk all day and does things through out the day, however, she like it peace and tranquility. She likes things neat and everything balanced.

She tries to be polite at times and is positive thinker. Although she gets stressed out very easy tries not to cry in front of others. She over does things and makes people around her worried. When she gets into a argument she feels guilty very quick of what she says. She also hates being alone even when she says asks someone to get out.

She forgot to be herself after her mother have died. When after Sugar is living with her, she finds her inner self. She also feels weird when other people talk about her mother.

Back when Saga was very young. Saga used to her her mother (Ingrid Bergman) play the piano all the time that's what influenced her to play it. Her mother was one of the best pianist players of all time.

When she was moving into Germany from Sweden, her mother was having help from people help move her piano into her house. Saga sneak onto the piano and hid under the sheet that was on it. The people that was helping Ingrid pulled up the piano that's when the sheet on the piano fell off and Saga was hanging on the string that was onto the piano. Sugar's mother help Saga break her fall and made the snow soft and worm so that Saga didn't get hurt. After Saga saw the adult fairy that was Sugar's mother. Her mother ran over to her and picked up her daughter.

A year or two past and Saga was in the living room playing her mothers piano. She heard her door bell ring and she answered it. Some man was at the door. Asking Saga if she was the daughter of Ingrid Bergman. She did answer the man with a yes and heard something horrible what he have to tell her. The man said that her mother have died by she got hit by a car from riding on her bike from the rain. Saga cried and keeps calling out to her mother. It is said Saga's mother died on her birthday. They had a funeral the next day then later on Saga moved in with her grandmother.

3 years passed since Saga's mother have died. In the anime of A Little Snow Fairy Sugar Saga is somewhat obsessed with planning, scheduling her day nearly to the minute and is frustrated when her plans go off schedule. Saga works in a coffee shop and regularly stops at the local music store to play her mother's piano. She haves two really closed friends, Anne and Norma.

One of times through the beginning manga and anime Saga ties to get rid of Sugar.

Saga meets Sugar by the local music store and is very confused of what Sugar is and what she wanted at first. Saga realized that Sugar was rubbing her belly and fall over show that's she's hungry. Saga pulls out her waffle and gave it to Sugar. Sugar at first didn't know if she should and takes a little bit of the waffle. After the first bit Sugar fell in love with it and was eating it to it was all gone.

Later on Saga notice that no one can see Sugar, but her. At first Saga kept getting annoyed by Sugar when Sugar was just nosy about stuff. Saga easily forgives Sugar.

She meets Salt and Pepper right out by the school being interdicted by Sugar. Pepper corrects Sugar that no humans can see fairies. Salt takes advantage and calls Saga a depressing human. Saga got annoyed really fast and answered him back saying sorry about my depressing looking. making Salt and Pepper stun. Salt acts like later she was cool that she can see them.

In the Manga of A Little Snow Fairy Sugar it's like the same when Saga first meets Sugar, but instead Saga shows her Grandmother Sugar in her hands eating a waffle. Her grandmother gets confused of what Saga was showing her.

In the anime it was little unknown if Vincent (Mr Bear Nickname Sugar names him) if he could see the fairies or not. In the Manga he gives Saga a note that say;s "Say hi to the three little ones for me."

Many of times through out the manga and anime, Greta tries to get Saga to notice her, Saga often is stuck in her own little world.

In the episode where Saga get's lost with Sugar and her two other friends, Salt, and Pepper for searching for a twinkle. It brought her closer to the other fairies and Sugar. In the manga on same episode when Saga get's lost in the woods with her friends in school. Everyone blames Saga for them getting lost and Greta takes up for Saga and tells the other kids that they was being immature. Saga in the book tells her friends that she can see a fairy name Sugar and her friends help Sugar some twinkles.

After helping Sugar find a twinkle, Saga loses her ability to see season fairies in anime and the manga. 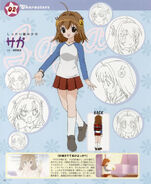 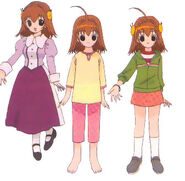 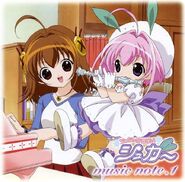 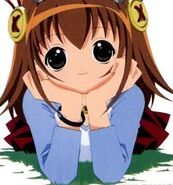 Add a photo to this gallery
Retrieved from "https://alittle-snow-fairy-sugar.fandom.com/wiki/Saga_Bergman?oldid=4433"
Community content is available under CC-BY-SA unless otherwise noted.